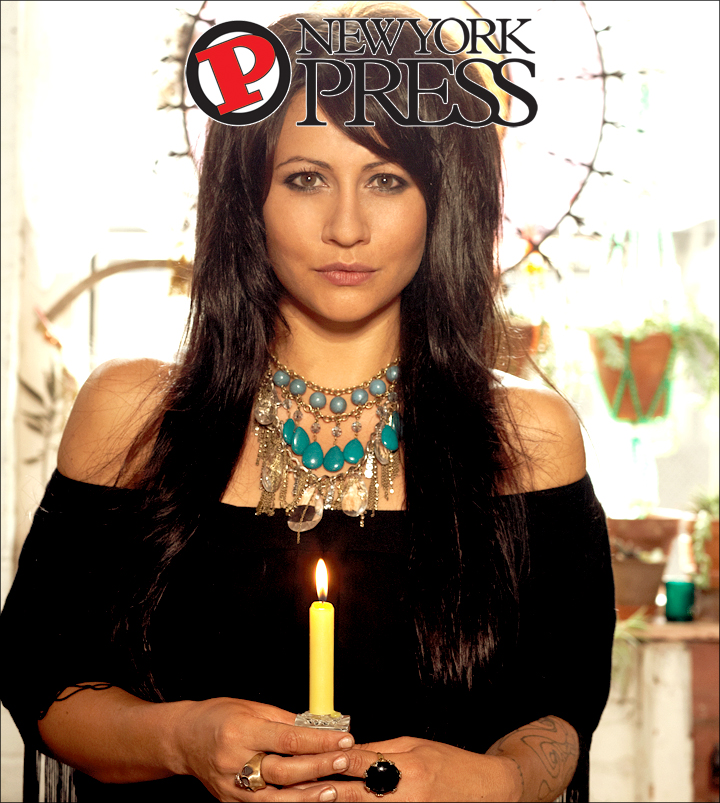 My latest art direction/styling project for New York Press is a cover shoot for musician Frankie Rose, formerly of Vivian Girls/Crystal Stilts, who currently fronts the band Frankie Rose and The Outs.

I had the opportunity to work with talented rock photographer Jackie Roman and after brainstorming, we decided on this theme: Mystery, occult, and magic, with late ’60s Russ Meyer/early ’70s “Witchcraft Today” paperback covers and altar imagery as inspiration. 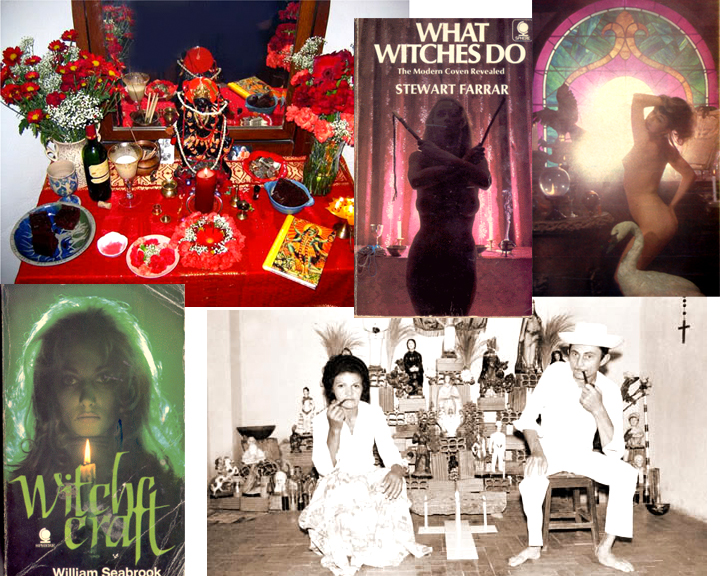 Imagery from the photographer’s inspiration board.

The photo shoot turned out really well and we got some amazing images. Here is what we picked for the cover: 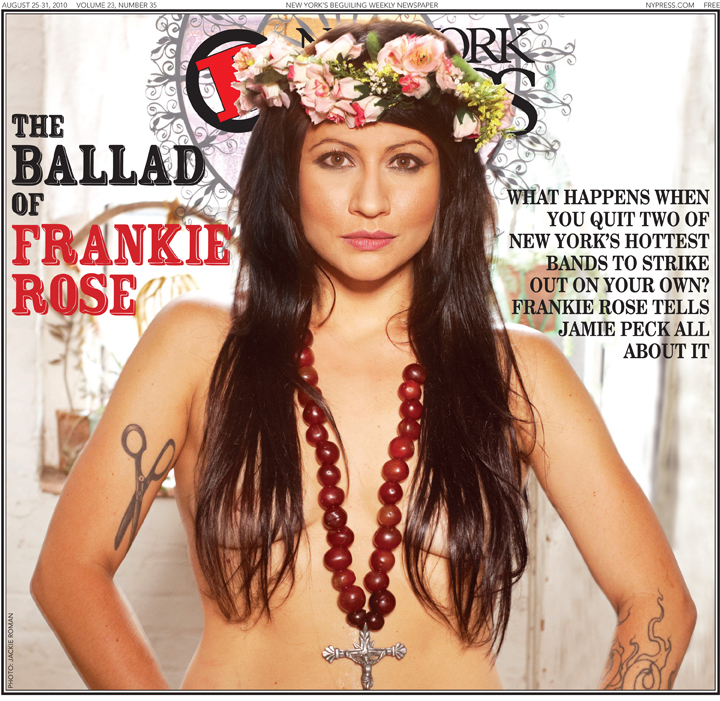 Now this is where shit hits the fan; this photo caused quite a stir in the online community, particularly on the music blog, BrooklynVegan. First of all, I don’t care whether or not someone liked the concept or execution of the cover; everyone is entitled to their opinion. I personally stand behind the work though, and no one’s comments will change that.

However, this is where I found some of the reactions annoying: It’s really lame that some people felt the need to be immature, obnoxious, a hater, or worse, sexist in their comments. Not only that, but some of the commentary were based on inaccurate assumptions. For example, some people thought a man was in charge of this photo shoot. In answer to this comment from the post:

“fuck the guy who suggested she take her top off…”

Ahem… for the record, the art director (me) and the photographer (Jackie) are BOTH women. This was a creative collaboration between me, Jackie and Frankie, approved by all female parties involved. The goal was to create beautiful, compelling imagery of a woman who’s very confident and comfortable in her own skin and we achieved that.

Nudity is not a new thing (think Janis Joplin’s iconic nude portrait, among countless others). Yet, decades later, some people still freak out when a woman poses shirtless. Big fucking deal. Plus, have you heard?… Sexism is stupid.

There were some other juvenile comments which are not worth reposting here but to see my point, you can find it at http://www.brooklynvegan.com/archives/2010/08/frankie_rose_go.html. Sadly, it seems that Crystal Stilt Kyle Forester’s quote from the New York Press feature rings true:

“The girl thing is weird because it’s good and bad,” says Crystal Stilt Kyle Forester, who used to play with Rose. “People love girls in bands but they want to write lewd shit about them on Brooklyn Vegan. It is weird that the indie rock world is supposed to be politically progressive, but in terms of gender politics, it’s sort of like Mad Men.”

This started out as a straightforward, behind-the-scenes post, but I felt compelled to speak out as the absurd comments unfolded. Regardless, I stand behind the decisions that I, Frankie and Jackie made. Frankie’s a strong, independent woman who’s not afraid to be herself and I can respect that. Now, back to my original intent: Here are outtakes and behind-the-scenes shots.

Unless noted, photos by Jackie Roman. 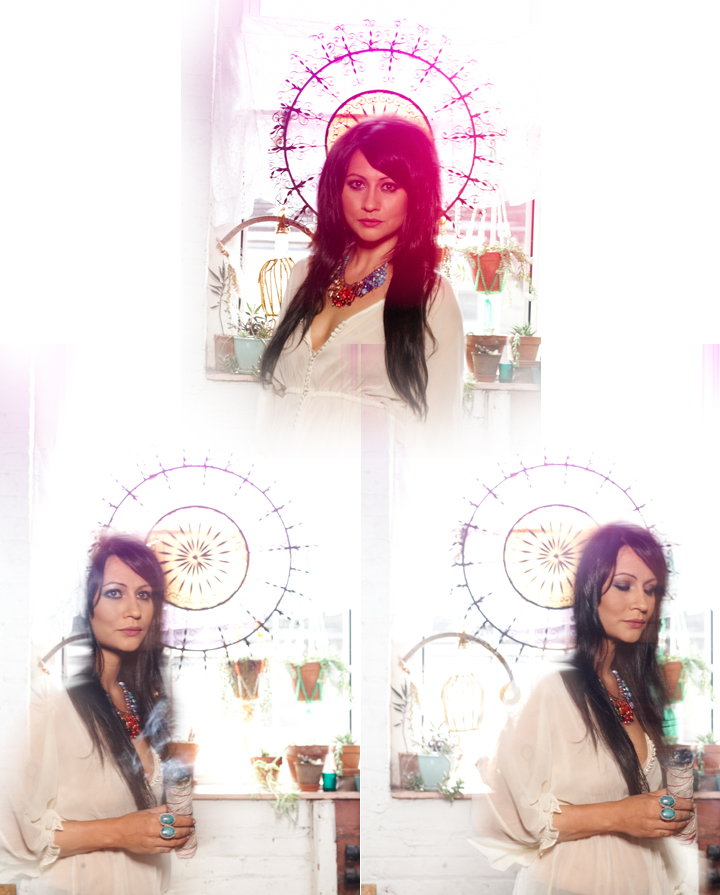 Experimental shots of Frankie with filters, different exposures and motion. 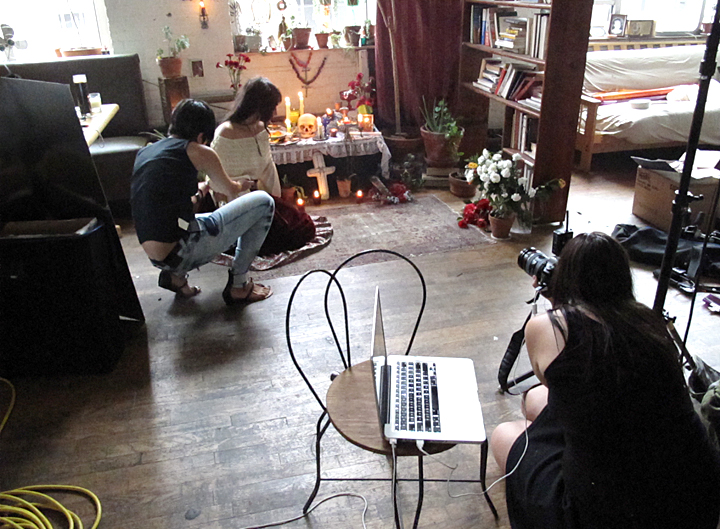 Me styling Frankie as Jackie sets up the shot. Photo: Danny Goldshtein. 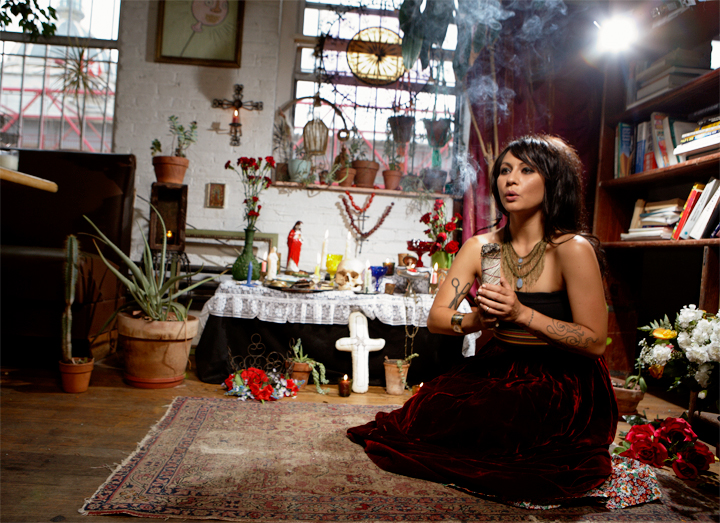 Frankie blowing sage on the set. 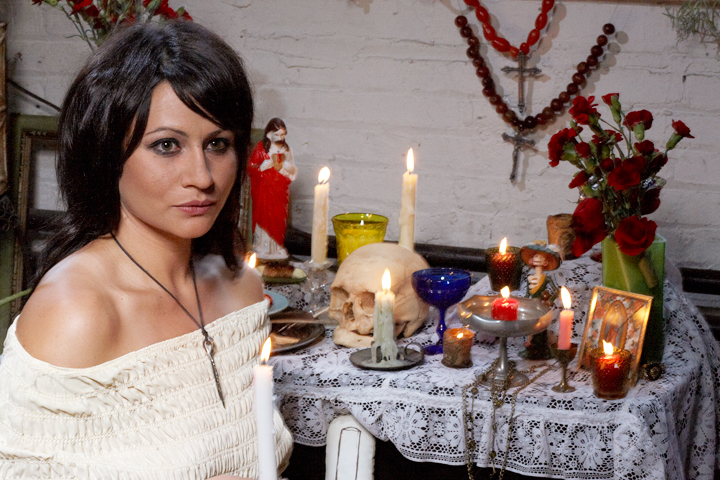 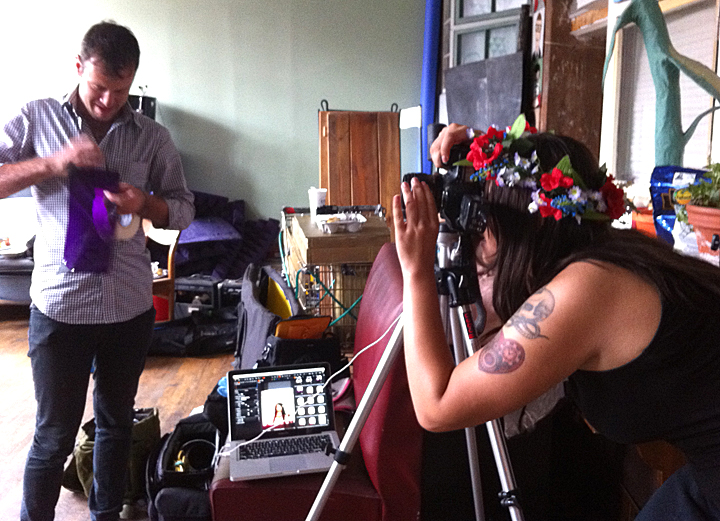 Danny assisting as Jackie clicks away. Photo: me. 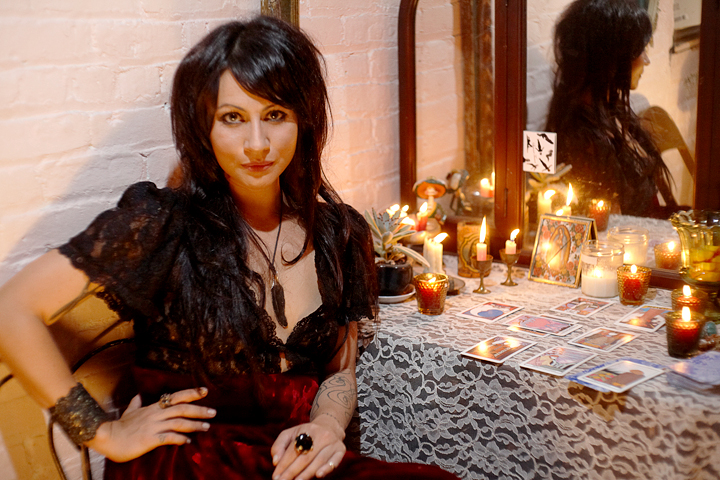 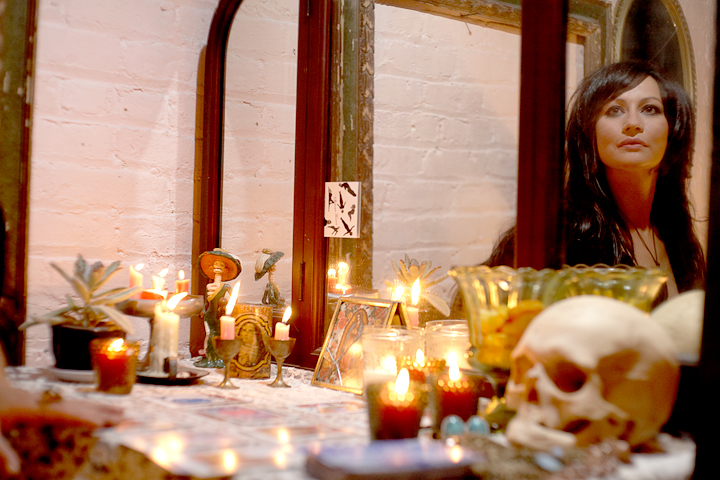 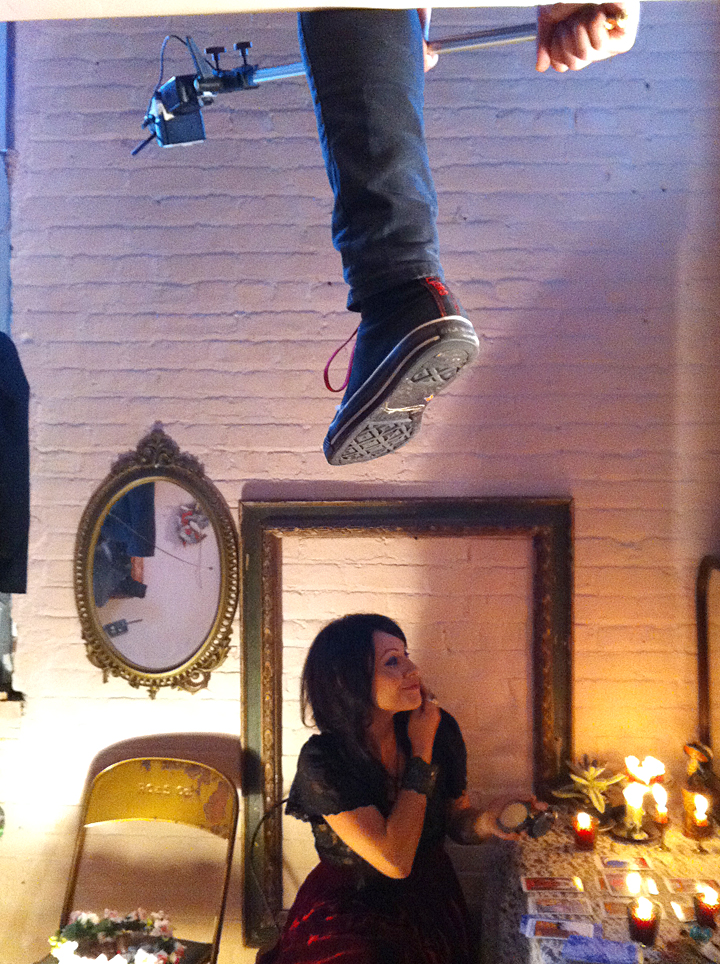 Love this shot of Frankie primping while Danny’s perched on the loft above, lighting the shot. Photo: me.

Check out Frankie Rose and The Outs here.

Lastly, if you haven’t seen it, interior photos from the print edition below. 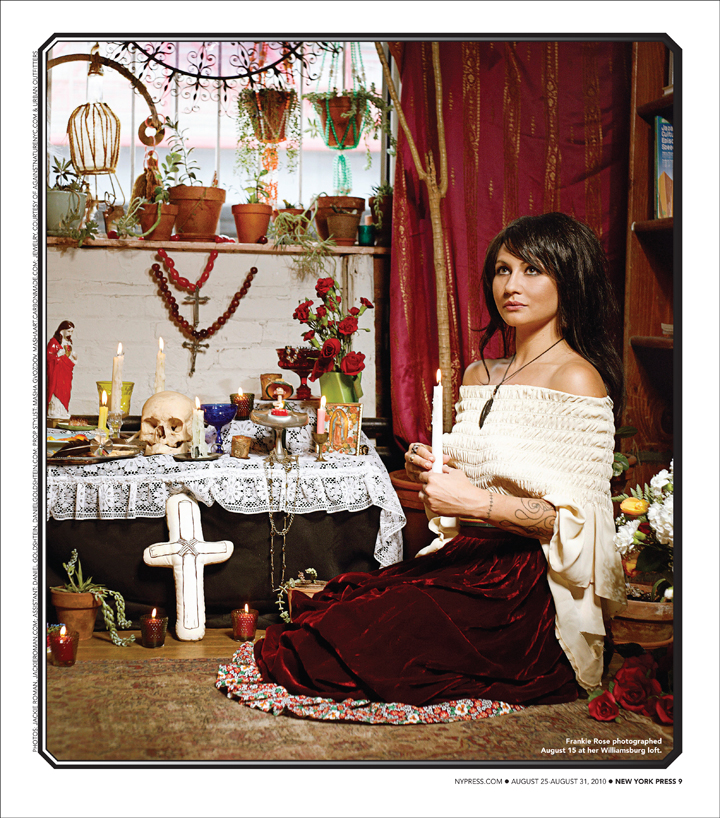 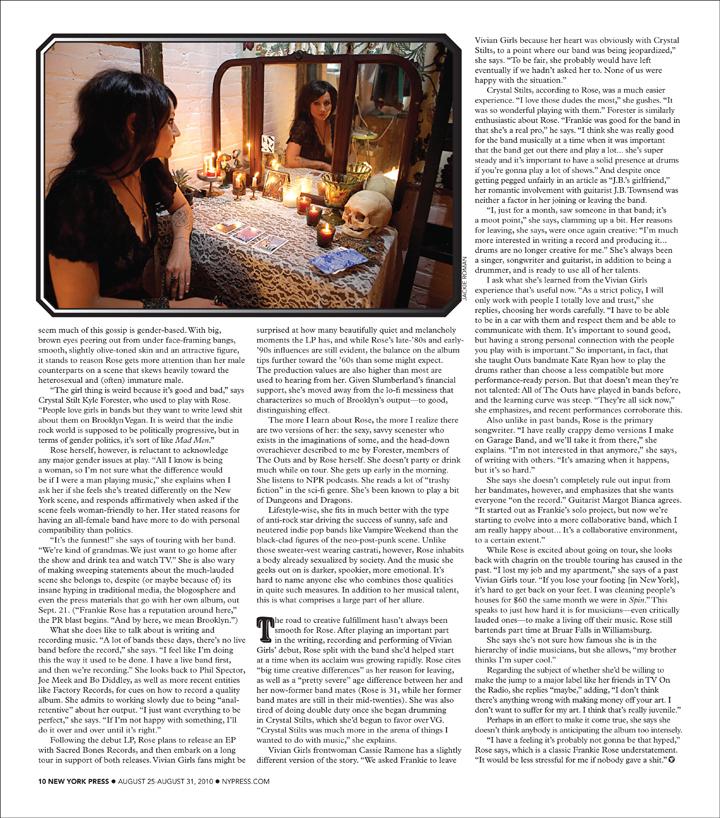